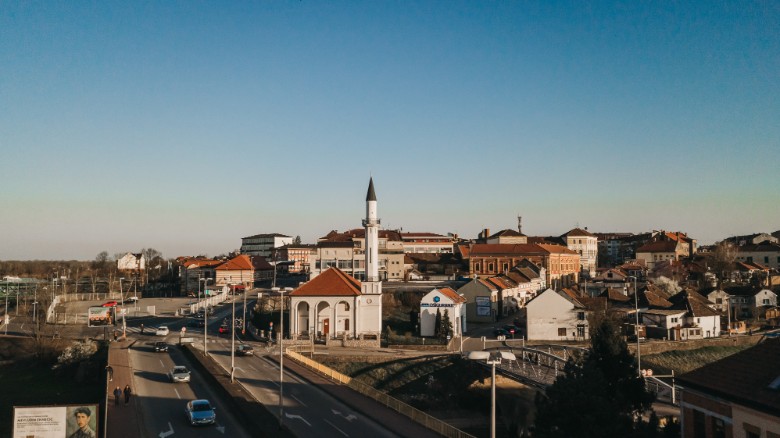 The Atik Mosque is located in the city center, in the architectural ensemble of Konačko Brdo, near the mouth of the Brka River into the Sava.
It was originally built of wood and expanded over time due to the increasing number of believers. A maktab was constructed right next to the mosque, and the courtyard had a well 6 or 7 meters deep well which was used for taking abdest.
The Atik Mosques falls into the category of one-room mosques, covered by a four-story roof. The facade of the mosque is horizontally divided by a series of facade openings and cornices. The first facade cornice is half the height of the wall, and the second is below the roof itself.
The minaret of the mosque has two serefes, it is made of brick, plastered and painted on the outside. The lower part of the minaret has a square base, while the base of the upper part is eight-sided. The minaret has several levels with decorations, the first of which is below the roof. The second string is located under the serefe, and the third is in the middle of the minaret. The last level is located at the level of the roof and represents the continuation of the roof cornice.
Next to the mosque was its harem, part of which was exhumed during the construction of Green Market in Brčko.
The Atik Mosque with harem has been declared a National Monument of Bosnia and Herzegovina