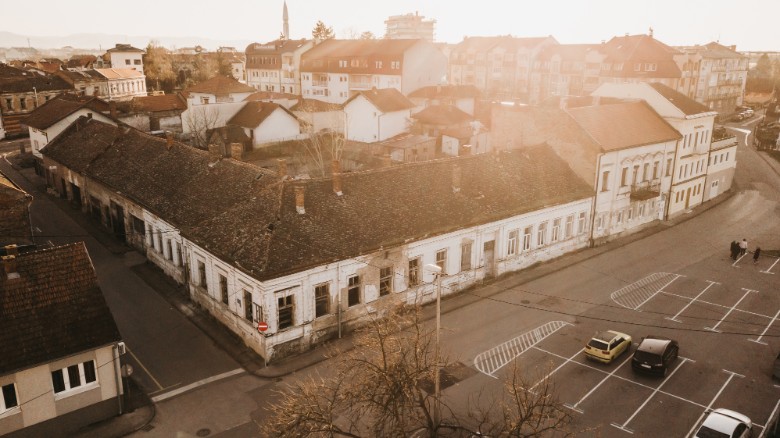 The First Post Office was the first facility established for the purpose of postal traffic in Brčko. It is located in the residential area of Kolobara, near Islahijet and the Kočić House.

The Brčko Post Office was established in 1864. Only one clerk worked in it, and all postal traffic was conducted with Bosanski Šamac, Zvornik, Tuzla and Sarajevo. The Post Office had a stamp, which was in use from 1865 to 1878. The postmark, in Turkish, read: POSTEHANA BRČKI, i.e. The Post Office Brčko.
The Post Office is one-storey building and has an L-shaped angular disposition, with two asymmetrical wings, totaling 511 square meters. The total height of the building is about 8.4 meters. There are 14 openings on the facade, of which 13 are windows.
The street side facade was designed in the neo-Renaissance style, which is reflected in the regular rhythm of the window openings, highlighted by the roof cornice and the horizontal division into shallowly separated strips. Throughout the building, the roof cornice is slightly prominent and profiled with a characteristic recessed gutter. Below it there is a shallow frieze that ends with a horizontal profile that extends along both main facades. The roof cornice, frieze and horizontal profile, along with series of windows across the facade surfaces, give a specific appearance to the whole building.
The First Post Office has been declared a National Monument of Bosnia and Herzegovina.